What happens when you're a dude with a tendency to express himself through music, a lot? And being in a band becomes restrictive to your expression? Well, as Melbourne musician Shaun Tenni can tell you, you just go solo as well so you can make twice as much music! Problem solved. The thing with being in a rock/grunge band is that they don't really do much softer stuff, but sometimes guys who play grunge need a little bit of quiet reflection too. Shaun’s introspective and often intoxicating solo work exemplifies this; with their intimate sounds and lyrics that read like poetic journal entries or faded photographs, Shaun's songs are truly a glimpse into his mind. 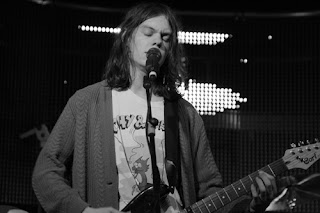 Paper-Deer talks to Shaun Tenni about musical epiphanies, the first song he ever wrote, and how he used incense as a lyrical symbol for something more profound.
You’ve been writing and performing music since you were young. Do you remember if there was a particular moment where you thought you might want to pursue music as a career?
I remember when I first started making music and teaching myself guitar; I was playing all these three-chord pop/punk songs and thought, "This is so simple." So I started writing my own songs and because I didn’t have a band at the time, but really wanted to play in one, I did all the other instruments in a midi program called Guitar Pro. It took me a while at the time, but I did it anyway. It was about that point where I thought, "Hell, I can actually do this!" and writing music took over my life.
You wrote your first song at the age of 14. Can you remember how it goes? What does your current self think of it?
I had been going out with this girl but I didn’t really like her; she was beautiful, but very selfish and stupid. So I broke it off and wrote this song called Hot Body, Bad Mind and my friends loved it. That was the first real together pop song I had written, I still remember it and have it notated in guitar pro. I like it because it was the start of expressing myself through music, however embarrassing some of the lyrics may be, and I still appreciate it.
Well, we can't all be amazing lyricists straight away! But to change the subject to a more recent achievement, your debut single Nag Champa reached number 12 on the Triple J Unearthed Indie Charts, so congrats! How did it feel?
Thank you! I had just put Nag Champa up and was letting everyone know through the Facebook page that they could rate/review it. I would wake up every morning for uni and, in a daze, refresh the stats to see the listens and chart spot jump up more every day. At one point it reached number 12, which lead to more people contacting me about shows or just to tell me how much they enjoy my music, so I was absolutely stoked.
For our readers who don’t know, Nag Champa is an Indian fragrance commonly used in incense. You must like it a lot to write a song about it! Does it symbolise anything or do you just find it very comforting?
Well, I like how something very odd or obscure can take on a profound meaning when applied to song. So I was wondering what would a song about Nag Champa sound like... Then the opening line and melody came in my head and I ran into my room and wrote it. I do find the incense very comforting but I also enjoy the fact that some people don’t know the incense and interpret the lyrics to something present in their own life. I love that kind of ambiguity.
You also play in a grunge band. How different is the writing process for band songs compared to when you write your solo stuff?
The solo stuff came about because from writing band songs all these years I have so much material that would work better as quieter music and was unsuitable for what I wanted to do with the band. So it all piled up and I decided to use a heap of it with some new stuff and do a solo album. I suppose music is a musician’s own special way of expressing him or herself, so both the band and solo stuff are just different means of doing that for me; the band is prone to (but not always) louder, angrier and more upbeat music while the solo stuff is open to being more mellow.
Also, is it a completely different experience playing as part of a band and performing solo, and why?
It’s definitely something you have to adjust yourself to. When I'm playing my solo stuff, I’m sitting in a chair with my friend on lead guitar and it’s a chilled out, mellow, intimate performance. You can’t really break that and shout at the crowd or anything like that; you’ve got to find different ways of entertaining. The band is more of an electric adrenaline-fuelled performance where everyone just lets loose. They are definitely two different performances that I don’t want to get confused, otherwise I am quite sure things would get very awkward!
What was your favourite album of 2010, and why?
On my birthday last year), this cool chick messaged me saying, “Late birthday present, YouTube Neutral Milk Hotel.” So I looked them up on YouTube and listened to the first song, King of Carrot Flowers pt 1, and really dug it! Then I got the album In The Aeroplane Over The Sea
If you had to describe your sound in one word, what would it be? People.
UPCOMING GIGS:
LINKS:
By Stephanie-Bowie Liew
Posted by Paige X. Cho at 4:27 AM