You learn something everyday. Like "death hop", for example, refers to a hybrid genre of music that blends together metal, hip hop, rock and hardcore into one fucking fierce package. And while at first you may be imagining some giant, fire-breathing Godzilla rabbit stomping on people, one listen to Melbourne death hop duo Over-Reactor will wipe your face clean (and that dopey smile normally reserved to Lolcats).


Founded just a year ago, Over-Reactor is the experimental music project of former Mammal frontman Ezekial Ox and ex-Dukes of Windsor drummer and beat master Cory Blight. And while there may just be two men onstage when they perform live, they make up for their lack of numbers with sheer, raw energy, furious beats and intense vocals. 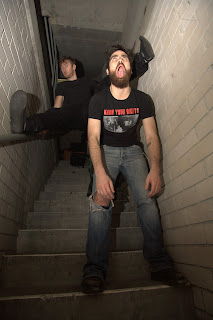 Paige X. Cho met up with Cory to talk about the pair's insatiable need to create music, and where the term death hop came from.

Over-Reactor are the first “death-hop” act that Paper-Deer has come across. Did you coin the term?

We actually didn't coin the term. I heard a fan at a show define us as death-hop and it stuck for us, and we’ve noticed other artists on last.fm tagged as death-hop. We don't intentionally create our sound - it just spills out of us whenever we're together. We're just the pigeons. It's up to others to find a suitable hole to cram us in. I think we're right next door to "heave-hop."
Metal/hardcore and rap aren’t genres that seem to traditionally mix together. Do you find Over-Reactor equally draws fans from both camps?
We draw fans of metal, hardcore, heavy rock, hip-hop, and music in general who are open to experimentation but we're often despised by the more old-school traditional fans of heavy music. It's hard to pinpoint a stereotypical Over-Reactor fan – they seem to be a group of free thinking individuals who come together to watch something different.
You’re both well known around the traps because of Mammal and Dukes of Windsor. What can fans of these two acts expect?
Our sound, attitude and vibe is different to both of those bands. We want to push ourselves to explore ground we haven't previously covered. I see more Mammal fans at the shows than Dukes fans though. Our sound is brutal and intense, so I guess it's just not for pop rock enthusiasts.
The act only formed in January 2010, yet you’ve already released a second album on top of your debut double album! Was there a conscious decision from the beginning to release lots of material or was it organic?
Right from the beginning we set ourselves the goal of completing two albums in 2010. Our creative birth canals were fully dilated from day one, and songs have been gushing forth ever since. Zeke is the first vocalist I have worked with who has a similar work ethic to me. We both push ourselves hard.
Tell us all about your second album.
It's called Lose Your Delusion Too. The entire album was recorded, mixed and mastered in my house. Influences on our sound are artists such as Melvins, Pantera, Sepultura, Beastie Boys, Rage Against The Machine, Helmet, Fugazi, Black Flag and Slayer. Marijuana was an influence too - we were hell stoned during most of the writing process. I actually can't recall a second of it.
We use amp simulators on the guitars and bass, and blend them with big, roomy drums. The synth sounds and samples we use are more commonly heard in Tech House and Minimal Techno. They actually work really well with heavy guitars and drums. There are elements of metal, hardcore punk, industrial, rock, and hip-hop. I play drums, bass, guitar, and program synths and samples. Zeke sings, and then I'm left to mix the album while Zeke pops in and out with fresh mixing ears and ideas like an Aussie Rick Rubin.
How is the second album different from your first?
It was done in about a third of the time as the first record. This time we added a couple of extra drum microphones we didn't use on the first album - snare bottom, and an ambient microphone in the kitchen. I swear by the kitchen mic. It sounds awesome blended in there. The album is more experimental. I think it takes longer to grow on listeners, as there are some more complex ideas, time signature and tempo changes.
Over-Reactor record, mix and master everything by yourselves. Is it sometimes difficult to step back and look at your work objectively?
It's impossible. I enjoy listening to the demos before we record the final versions. I can imagine what they will become. I can't listen to the finished product. It gives me extreme anxiety. I just analyse the performance and production. Zeke loves putting it on in the car when we're on the road but I hyperventilate until either the album's over, or I crash into a tree.
Anything else you’d like to add?
We have a tour in the pipeline, and some new material underway which is heading in a very different direction to the first two records. We're working on film clips for Point To Push from the first record, and Best of Worst from the second. They're close to being finished. 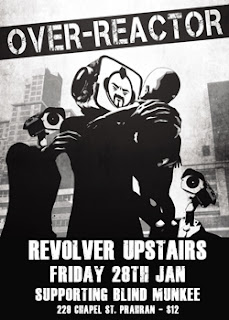