No matter how you want to pronounce their name, there's one thing about Melbourne pop-folk act Canos that everyone agrees one: they are a troupe of bloody talented musicians. With seven different accomplished musicians making music at the same time, the end result is beautifully layered pop-rock music created with folk instruments. This music is the kind of music that should be the soundtrack to the daydreams. Gorgeous, lush and deliriously delightful, and best served with cloud-watching, picnics with lovers and a glass of wine. 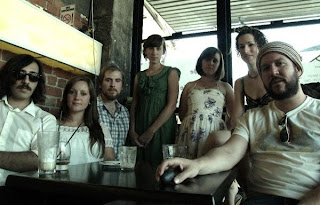 Paper-Deer had a group discussion with Cameron Lee, Sarah-Rose McIvor, Johnny Moretti and Luke McIvor about the logistics of being in a large band and their upcoming special edition EP.
The name “Canos” is unusual. We’re guessing that you might get called “Canoes” by accident a lot.  What’s the worst mispronunciation or misspelling that you’ve experienced so far?
Well, “Canoes” is pretty bad to be honest.  We have also been called “Kay-noss” and “Cano” because someone just assumed that the “s” was silent. When in actual fact the “c” may be silent… but it’s not.
There’s a lot of you in the band! Does that make band prac really difficult?
There are seven people and we all seem to live miles from each other! We have people in the group who come from Boronia, Essendon and even as far as Yarra Junction.  So organising rehearsals is usually a logistical nightmare but we always seem to manage.
There are some impressive instruments that make up your sound, like the cello and violin. Were any members of the band classically trained?
Yeah, our strings players were both classically trained which helps because the rest of us are classically untrained.  But it has been the cause of a few debates about song structures and arrangements but ultimately I think we have found a balance that we are all happy and comfortable with.
Canos’ bio states that you are part of the “new folk movement sweeping its way across Melbourne”. What exactly is the new folk movement, and how is it different from just plain old folk?
Some of our songs are little more traditional I guess, but we definitely incorporate some pop hooks and pop themes. The new folk movement does resemble traditional folk in the sense that they use acoustic style instruments but really that’s where the similarities end.  We are essentially a folk-pop/folk-rock band.
You released your debut EP at the beginning of last year, and since then have recorded more tracks with producer Steven Schram (The Cat Empire, Little Birdy). What else did the band get up to in 2010?
We have been working furiously on our live sound and are bracing ourselves for a big 2011. We did a residency at the Wesley Anne in Northcote as well as a few shows at the Northcote Social Club (including our very first EP launch that we managed to sell out).  We also recently won a competition where we won a distribution deal with Valleyarm which we’re making use of for our latest release, a special edition release of our debut EP with 2 new tracks recorded by Steven Schram.
What was it like working with Schram, who is such an amazing producer?
He was great to work with! His philosophy is to record a great performance from the band. So he listens to you and gives feedback on the performance as you go until we’ve got the performance perfect and on tape. Plus he’s great fun to work with!
Where can people pick up copies of your EP?
We will have a physical copy with one new song with a song from The Buegs available at the EP launch. The whole special edition EP is available to download from iTunes and other popular music stores.
What other plans do you have for 2011?
Touring and playing some festivals and releasing some more songs. We’re currently working on new material!